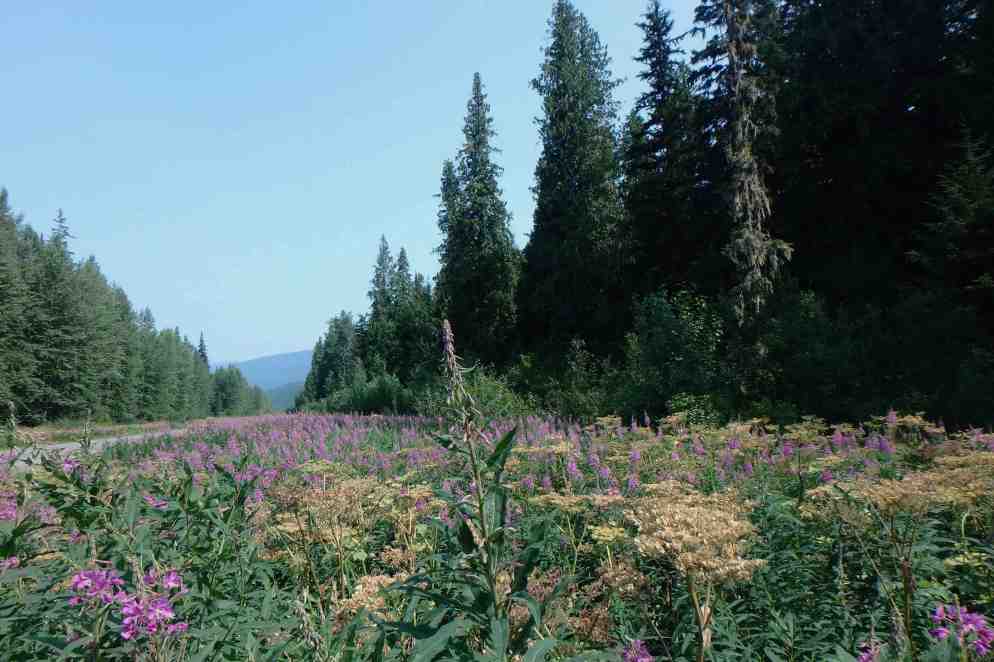 My eyes popped open it turns out quite early that morning.  I awoke and it was quite light out so I was grateful that Simba had let me sleep in a bit.  I checked the watch and it was all of 5:00AM.   Seems I forgot how the farther north one goes in the summer the longer the days.  But having a close to 500 mile driving day,  I climbed out of the tent and discovered it was a chilly 49 degrees.  The good news was that the new tent sleeps warmer than old Coleman tent we inhabitated previously. 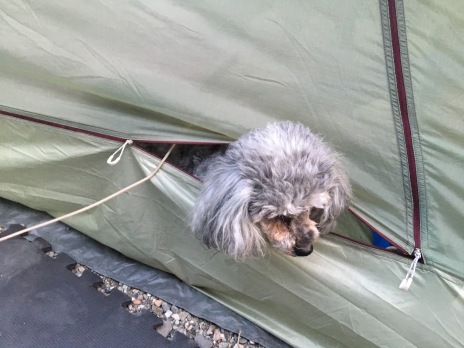 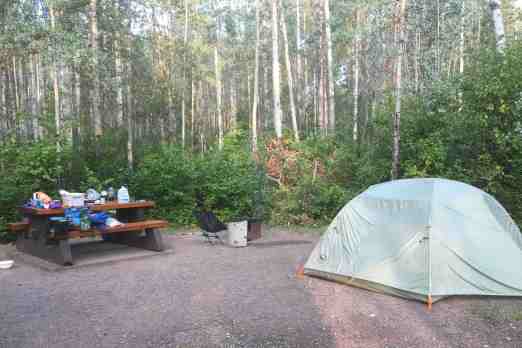 Simba climbed out so I fussed with his breakfast and my coffee…after  quickly finding another layer of warm clothing.  I sat down to enjoy my coffee  and since there was no cell service, thus no access to the news of today’s political chaos agenda. That was good for a chilly  morning in the woods.  I could see that Simba, born and living in Florida for 14 year, was shivering even with his doggie coat on so I snuggled him close to me in my little backpackers chair. What a sweet sweet feeling it was out here in the semi-wilderness.  Kili popped himself out of the tent about a 1/2 hour later and turned right around and went back in.  He refused to come out until I dragged him out after I had broken down everything else down in the camp, including the tent fly.  By now I had settled Simba in the car with the heat going and KIli seemed to welcome that. But I was stalwart and didn’t cheat with car heat!! 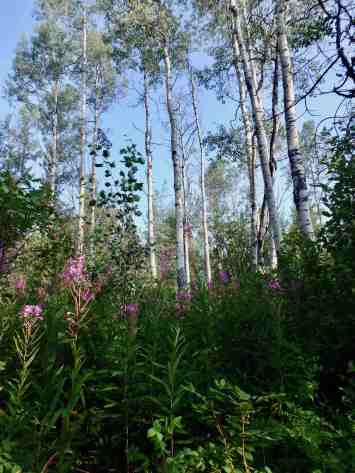 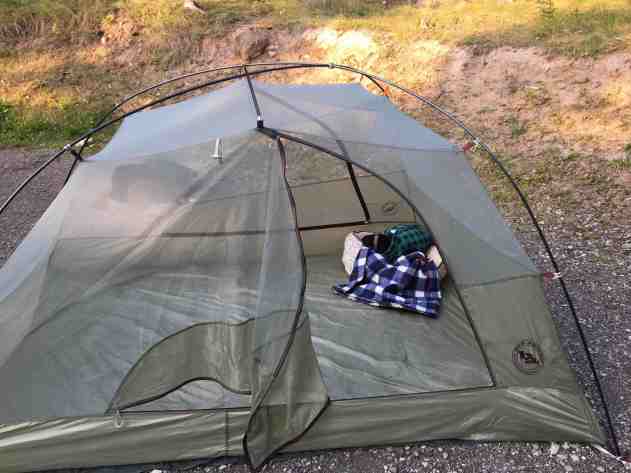 Once on the road it was a long day of relatively tedious driving, 477 miles from Big Bar Lake Provincial Park to Tyhee Lake Provincial Park. I was heading to Prince George via the Cariboo Highway (97); then north on the Yellowhead highway (16)  to Kilwanga and then up  the Cassiars Highway (37) to Tyhee Lake Provincial Park. The first challenge after getting on the road by 8:30, was to return to the highway via that 20 mile dusty gravel, washboard, cattle guarded road. The day was gray with everything again having a fine scrim through which to view the landscape.  It was a smoke haze caused by forest fires hundreds of mile afar. I was somewhat surprised by the landscape of the next few hundred miles. It has been a few decades since I studied geography and I doubt I learned anything specific about British Columbia terrain but I envisioned the entirety of my travels through British Columbia jam packed with awe inspiring rugged mountains and dense forests. I remember visiting Emerald Lake and Yoho National Park in the Rocky Mountains, in eastern British Columbia years ago.  However,  this route was quite in contrast to that recollection, with some lower peaked or rounded dome like mountains, hills, broad valleys, and the gray haze muting everything. It was quite hilly with moderate grades. Though the elevations of the mountains was about 2000-3000 feet above sea level, the mountains seemed  distant and nondescript. What was noticeable was large areas that have been infested by the pine bark beetle and there are massive stands of trees looking light ghostly skeletons.  They mostly target older Lodge Pole Pine and have devastated about 25% of the forestland which covers about 2/3rds of BC. The highway  continued to followed the Fraser River Valley.  There were  numerous lakes and many lovely views of Lac la Hache, an 11 mile long lake skirting the highway.  Another inserting natural feature are the basin bogs, swamps, marshlands  and lakes throughout.  The trees  are mostly sub alpine fur, Spruce, trembling Aspen, and Birch. The roadsides  were abloom with vibrant wildflowers creating quite a  breathtaking ride at times. I soon began to really appreciate the unique beauty of the forested hills, clear blue lakes, wetlands all flanked by an array of  magenta fireweed and purple and white lupine,  plus a variety of other white, yellow and red wildflowers 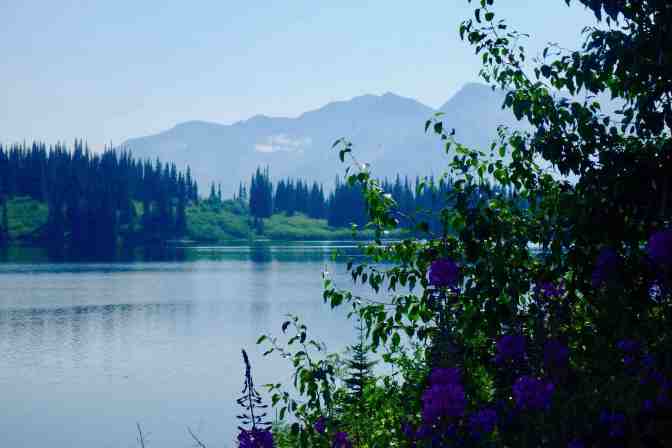 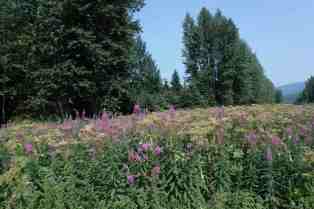 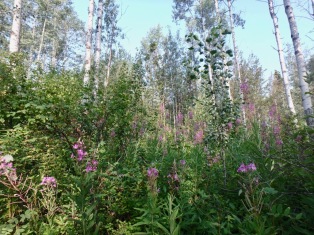 I stopped at 100 mile house (area an original post house on Cariboo Hwy) The name intrigued me, but the town really was not particularly unique. I was grateful for the 7-11’s big cups of coffee and of course gas and ice.  I had tried, on the previous day, to get coffee at  a couple non-familiar brand places and could not find  a big cup of coffee. So as much as I hate to use USA franchises when out of the country, I gave in and you can be sure they had the same big cups they have in USA. Happily on the  road, driving along it was clear that the major industry is forestry and you could see how it dominates the economy in Quesnel, with its massive lumber, pulp  and sawmills – and for miles either side huge piggy-back semis hauling logs. I skirted St. George and settled into making time and distance through a valley driven by forestry and agriculture and summer tourism, thus tailing both trucks laden with logs and hay bales and RV’s. 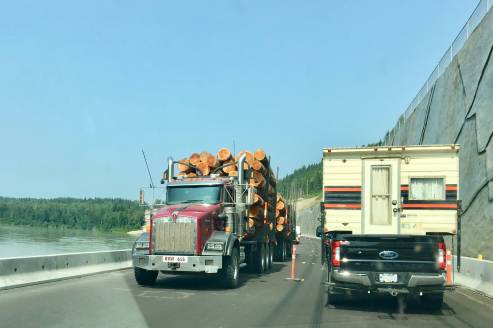 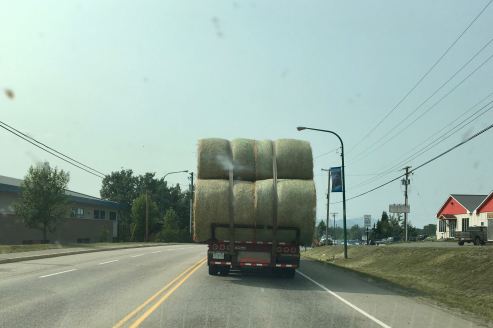 I was grateful that all of the BC highways traveled  have a generous amount of passing lanes so I never got too antsy to make that pass at 80 miles per hour because there would be opportunities in 1-4 miles.  Another thing to really appreciate about these highways was the frequent turnouts, litter barrels, and rest areas with well maintained pit toilets. 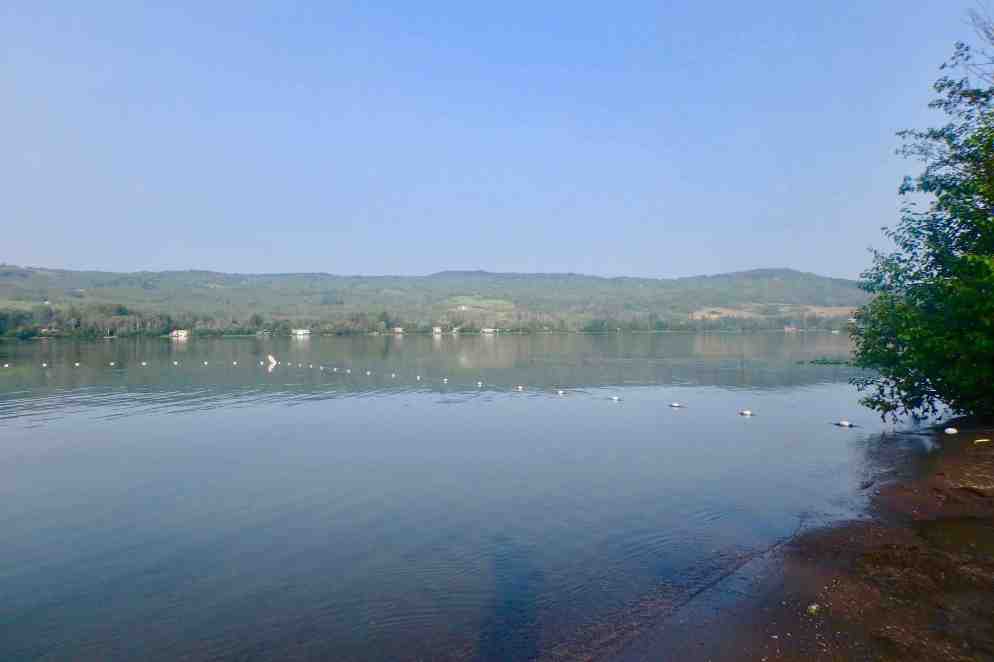 I arrived at the campground by 6:00 after 470 miles, and managed to get set up and meals accomplished by 8:00.  The park is on Tyhee Lake and is clear and blue and a very swimmable temperature.  Since the dogs were not allowed on the beach, I opted not to go in, though I think I didn’t really want to so they became a good excuse.  I took  our usual nightly walk around the campground. The park service attendant came around selling wood so I bought a bundle and I opted for the first campfire of this trip.  I can’t say that it was particularly satisfying. The wood was hard and did not burn well, it smocked and smoked some more, giving all of my clothing the post campfire burnt wood stench and it put out minimal heat. Lots of work for little reward.  Around 10:40, just as I was settling in, I heard a distant train whistle.  But soon it was not quite do distant and then it felt and sounded like it was roaring through the campground.