Welcome to  “season three” of my  Wanderwoman’s Drives Across Country blog. I am quite aware that a recurring TV or book series, may after a time become less enthralling and interesting or even a bit blander than earlier seasons.  So, I  hope that this “season’s” chronicle piques your interest more so than my living of it is piquing my interest!!!!

Day #1 June 18, 2018  The journey began on June 18th.  I was exhausted, sore and emotionally drained. I had sold my home and the closing took place at 11:00 am that Monday morning. The days before were over-stuffed with packing the POD with can opener’s and crowbars  powered by my daughter Tasia and son-in-law Steven, They managed to  squeeze my too plentiful treasures into a 16 x 8 x 8 POD to be shipped to Oregon. 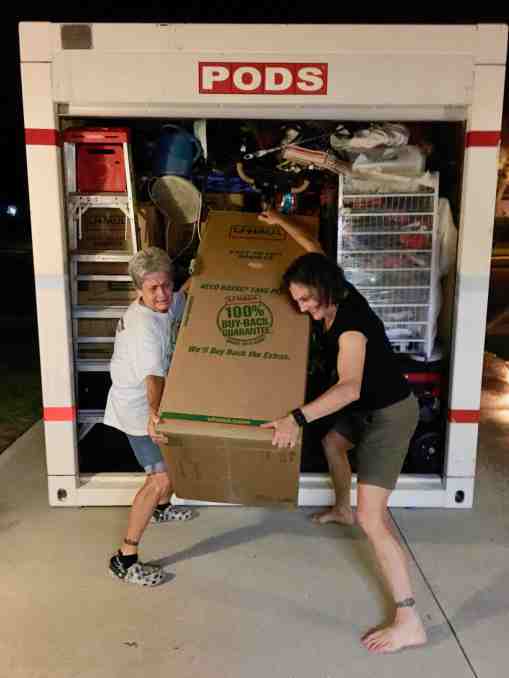 With the POD ferried away and Tasia and Steve winging back to Oregon, I began the final spit-shine of the home I lived in and loved for 18 years. With much assistance from my dear friend Suzette who ferried  many a carload to resale shops and provided awesome food, I was able to accomplish all that i had set out to do with one hour to spare.  Of course the process was not without a bit of drama towards the end: 1) there was a missing document which might have been quite difficult to procure in time for the closing on Monday —  of which I was informed of at 4:00 pm on Friday, 2) got stopped by a policeman for speeding on Venice Avenue (clearly my head was churning about so many other things  instead of my driving — but fortunately only got a warning,  3) fell off the stool when wiping out kitchen cabinets on Sunday pm onto the rather brittle tile floor and fortunately only ended up with bruises instead of brokens,  4) and,  received a stern lecture from a store owner who spied me dumping that last bag of garbage in the dumpster of shopping center I frequent daily (thought i had thoroughly surveilled the area— I played dumb and said I thought since i shopped there almost daily it would be ok. So I had my last BlackGold late at 10:00am and then head for the closing. 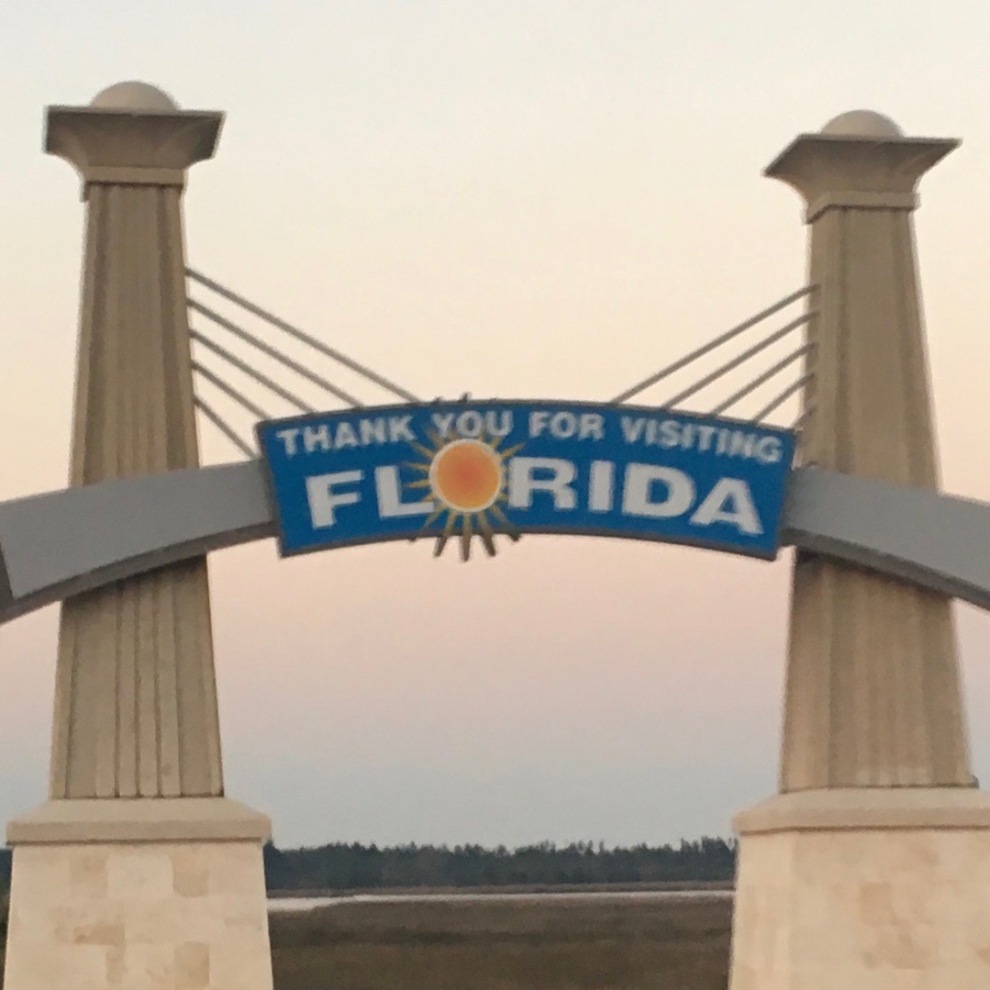 For a change I tried very hard to be sensible in my approach to ”season three” of the Wanderwoman’s drive across country.  The major difference is that I will not be doing a rerun of the return journey.  I originally had planned on my usual mixture of camping and occasional motels, especially when I anticipated having more time for this journey.  But because of my family commitment to drive my sister north each year (from Charlotte to her home in northern Michigan) and the timing then for the closing on the house, I did not have the time I needed for a leisurely journey.  I am due in Portland for a wonderful family reunion organized by my ex-husband on June 30th  and need to go through Medford, OR re-organize and re-pack (the never ending task of moving all that stuff from spot to spot, over and over again), get the dogs situated and then head on to Portland.

However for day one I decided I would drive only as far as Gainseville and i would not speed (for obvious reasons).  It was typical Florida drive replete with traffic congestion, road work, and thunder storms and lots of time to get lost in thought and reflection. I began to feel quite stressed due to the NEVER ending massive constructions projects along Interstate 75 – think I said the same thing last year in my blogging. in Florida. The only major difference is that the location of the concrete barriers and the neon orange traffic cones has moved up or down the interstate. The traffic remains hellish, fast and furious,  and I dread being wedged in between the huge 53 foot semi-trucks and the concrete construction barriers. I recall my first drive down Interstate 75 in 1981 when moving to Tampa, Florida from Chicago.  It was a steamy tropical evening, thunderstorms booming and flashing on the horizon, intermittent heavy rain, BUT very peaceful with minimal traffic.  Jump forward  37 years and my hope for a leisurely experience through rolling countryside is almost an irrational desire and I must settle  for the  mad rush to get THERE – wherever that might be. AND as i dutiful followed the speed limit of 70,  I feared being mowed down by just about every truck and car on the highway. Additionally, every single exit continues to sport its menu of McDonald’s, Burger King, Subway, Tacobell,  Phillips 66, Shell, Flying J Travel Center, Sinclair, Holiday Inn, Motel 6 (or 8 or 9), Choice, LaQuinta, Econo-Lodge, with the cloning going further and further out from every city and population center. I know we need a healthy growing economy but how many more carbon copy city and towns do we really need, how many more Walmarts and McDonalds do we need to grow???. I miss the trees and open vistas.

I decided my motel chain of choice would be LaQuinta.  They are quite a bit more comfortable than the other dog friendly (i.e. no extra charge) chains (Motel 6 and Red Roof) so I stayed in one outside of Gainseville.  Simba and Kili, my 14 year old pups, are great traveling companions but don’t offer much in the way of conversation or driving relief. They are also a lot of work.  I now have our motel routine fairly down pat.  I check in, get a cart and unload all of our gear as I have done historically.  I have it organized (or perhaps it might be better described as disorganized due to the quantity of items)  into the bag of my overnight stuff, the cooler, the dog food bag, my computer and map bag, the dog medicine bag, my purse, and the water and food bowls. I get that into the room, return the cart, park the car and then take the dogs inside. They are last because Kili has this quite undesirable habit of barking desperately as if someone is beating him if I leave him unattended for even a few seconds in a motel room. When I get ice he goes with me, when I get breakfast I have to put him in the car because dogs of course are not very welcome in the breakfast area, when I have to take Simba out in the  night to pee I have to take Kili with me. Which bring me to relate the one untoward event of the day/night.  With my head elsewhere, I forget and left Kili’s unfinished food on the floor.  Simba has developed diabetes and extra food is a NO NO. BUT he does not know that, so chowed down on the generous remains.   I was puzzled as to how to handle this but opted not to give him more insulin.  In retrospect it was probably a mistake because, he started tap-tapping my head at 12:30 am and then at 4:00 am again to go out and pee and then come in and drink copious amounts of water — of course only to have to pee again. Withholding water results in BARK, BARK, BARKING which I sure would not be appreciated by motel neighbors (nor myself)!

Day#2 June 19, 2018 The destination was Biloxi Mississippi, about 450 miles. Since I did not journal specifically about it on that day, it is difficult to remember anything noteworthy. But that basically tells the story!  In the interest of “getting out of town” and further  west, I chose the Interstate 10 to get to Biloxi, MI.  There were moments when I regretted this decision but for the most part it was expedient, efficient, and in reality NOT awful.  The traffic actually was light, no copious amount of trucks, and there was a fair amount of rolling and wooded countryside. So I exited late afternoon for my LaQuinta destination at an interchange that could have been in Anywhere USA, replete with it’s motels, gas stations, big box stores and fast food joint. I now had 629 miles under my belt and still felt distracted, tired, road weary and of course feeling a lot of both sadness and grief of leaving my dear friends and the state I called home for 37 years. But  I also had excitement about the new adventures awaiting me and the prospect of being so close to my children and grandchildren.